The Transformational Agenda on May 7, 2015 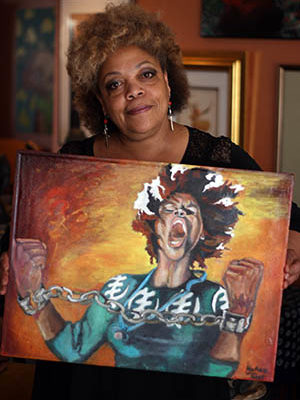 “If ever there was a time to fight back, stand up,
and release your voice…
it is now!”

The art featured on the cover, Listen! by Holly Roe, tells a story much deeper than what meets the eye. The striking image of an African American woman is the brainchild of pure frustration.

Motivated by the recent tragedies that occurred in Ferguson, Holly Roe’s painting bares it all—the feeling of being fed up with the relentless killing of black males, a mother’s pain of knowing that her child may not return home to her, and the need for African American female voices to be heard. This, she reported, ignited her paintbrush to create Listen!.

“I kept thinking about the reaction from Michael Brown’s mother. I understood her plea when she questioned if one knew how hard it is to raise a black man, to keep him in school, to keep him alive.” Holly Roe shared that she feels Leslie McSpadden’s pain and knows her struggle all too well.
Roe passionately revealed, “Painting this piece enabled me to express my pain towards the entire situation. From the constant police brutality, to the lack of jobs with adequate wages, to the thousands of young black men who will be killed this year by other young black men; it outrages me that not enough people acknowledge the issues.

Ferguson was just the beginning of a renewed discussion about old racial and social issues. It makes you want to holler, and I feel this way every day!”

Understanding the symbolism used in the painting is an important factor in fully appreciating it.
The binky or pacifier hanging from the woman’s neck is the color blue to specifically represent the nurturing that African American women provide their sons. It is also indicative of the age at which so many promising black lives are lost.

The dynamic head of hair was painted to show depth. The white in her hair is reflective of the lights of the police vehicles dancing wildly. Roe said, “In my mind, the woman is in front of the chaos.”
The Adinkra African symbol—Gye Nyame—prominently drapes her chest not once, but four times. Holly Roe inserted it as a complete call out to God to render strength in the time of chaos. As one interpreter stated, Gye Nyame is often interpreted as “Except for God” and simply means that one recognizes the supremacy of God and, in essence, one is not afraid of anything—except the Supreme Being. The sister in Listen! wears four Gye Nyame symbols as a shield of protection and as inspiration to break free from her chains. The breaking of the chains is not without pain, bruising, nor blood, yet her angst is such that chains—neither physical nor mental—can constrain her any longer. The love of black men has set her free to intercede.

Listen! represents the realization that we are still living in oppressive structures of institutional racism, destructive aspects of our very own culture, and behaviors inconsistent with “Black Lives Matter.” These structures are made and maintained by people hiding behind them; people in the government, people in power, people of the community, and people like you and me—people making decisions large and small that harm others. We must be mindful of how our decisions and our choices affect one other. Listen to your conscience! Listen to the outcry of the burdened!